An Introduction to Wireless Solutions

What Does Wireless Actually Mean?

Wireless really refers to any signal that is transmitted through the air. That can be sight, sound, X-rays, or radio waves. Radio waves are of special interest to Neal Systems and can be seen on the left-hand side of the spectrum shown below.

The Categories of Wireless

The highlighted portion, very high and ultra high frequencies are the frequencies that are the main focus of industry.

Why don’t we just put everything into these very high frequencies since there’s plenty of room and they allow for fast communications?

Whilst higher frequency does in fact equal more bandwidth and higher speed, it also equals lower range.  This is because the higher the frequency, the easier the wave is absorbed by anything including trees, walls, people and at high enough frequencies even gases in the atmosphere.  In fact, one of the major issues with 5G is the requirement for significantly more antennas, since at the higher frequencies the signals are much more easily attenuated.

Words, Phrases, and Acronyms in Wireless

The Cloud: The conglomeration of servers around the world that hold Google, One Drive, and iCloud data etc.

Colinnear: Antenna that radiates equally in all directions (in a single plane)

DNP3: A more robust version of Modbus favored by TRSS and used extensively in power and water industries

dBm: Power as referenced to 1 watt

dBi: Forward gain of an antenna compared to a hypothetical isotropic antenna

Encryption: A security method whereby data is encoded prior to being sent and then decoded at the other end so that capture during the transmission does not reveal the contents of the packets

Edge Device: Any device that sits at the edge of one network and provides connection to another – e.g. router

Frequency Hopping: Used with spread spectrum above; describes how the frequency is constantly being changed

Mesh Network: A network that dynamically switches its route to maximize transmission efficiency

Modbus TCP: An industrial protocol running on Ethernet that is the most commonly used of all protocols

Modbus RTU: A serial version of Modbus TCP but still widely supported and easy to use

MQTT: A low overhead, secure and popular protocol for getting data to the cloud

Profinet: An industrial protocol running on Ethernet favored by Siemens

Whitelisting: A security method to restrict access to only those nodes listed

Yagi: Antenna that is concentrated in one direction 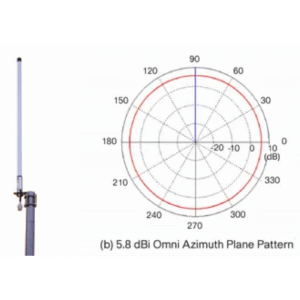 The Collinear antenna, shown on the far left and has a transmission pattern of the graph in the middle, at least in the horizontal plane.

These antennas are sometimes known as Omnidirectional antennas. 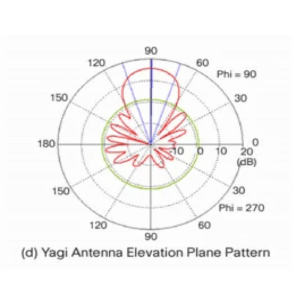 The Yagi antenna, shown on the far left and has a transmission pattern of the graph on in the middle, again, for the horizontal plane.

These antennas are sometimes known as directional antennas.

The more the cross pieces, the larger the gain. 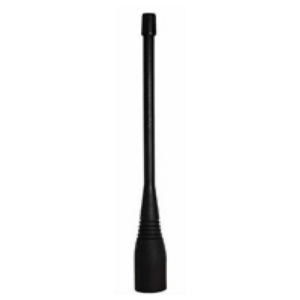 The whip antenna, which looks like this and can be purchased with magnetic mounts.  They are flexible, small, low cost and are typically low gain antennas in the 0 to 3 dB range.  They have a similar transmission pattern as collinear antennas.

Fresnel Zone – Out of Phase Reflections 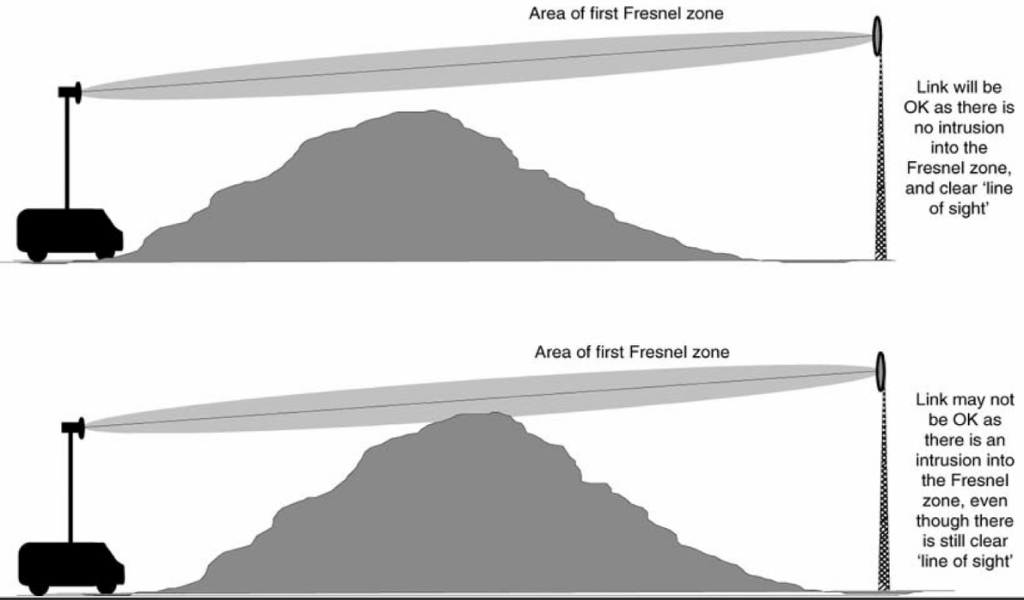 F1 =36.03 x Sqrt(d/f), where F1 is the maximum radius of the first Fresnel zone in feet; d is the distance between the two antennas, in miles; f is the radio frequency in GHz. 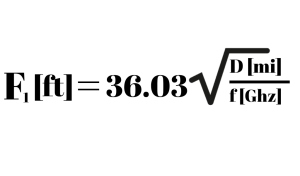 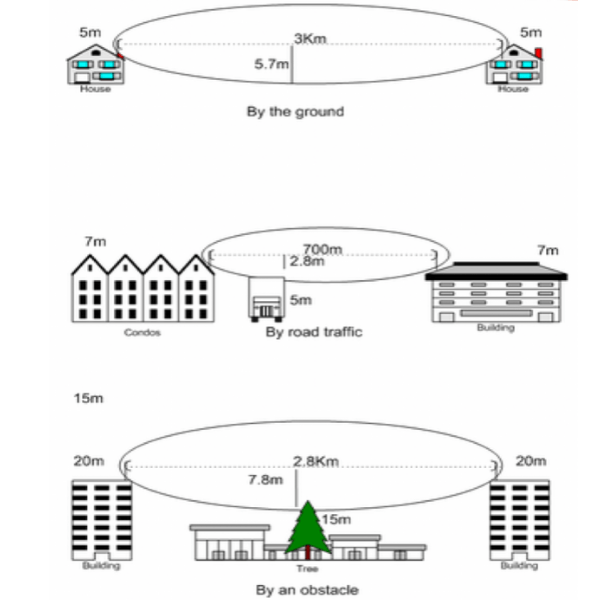 Each of the examples to the left, demonstrate how obstructions can protrude into the Fresnel zone and cause ‘out of phase’ reflections to reduce the received signal.  The most interesting one is the top one, which demonstrates how, despite line of site clearance, the ground can actually cause disruptive reflections. 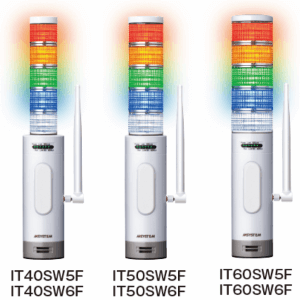 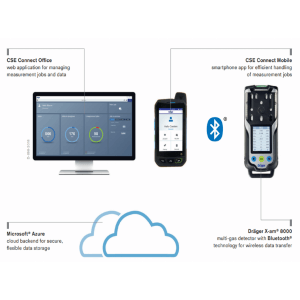 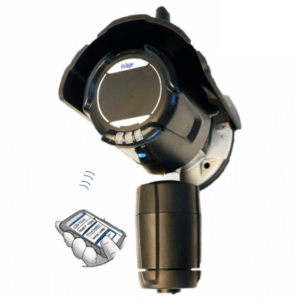 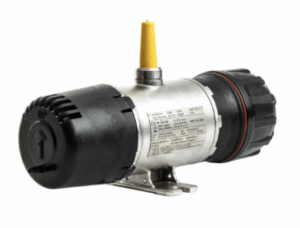 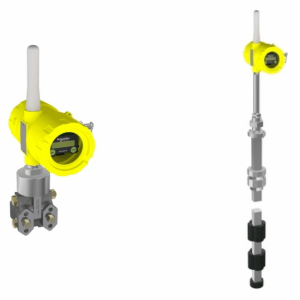 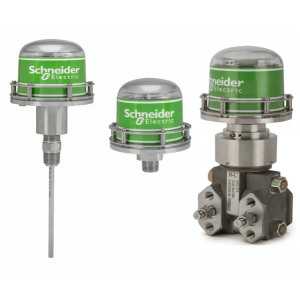 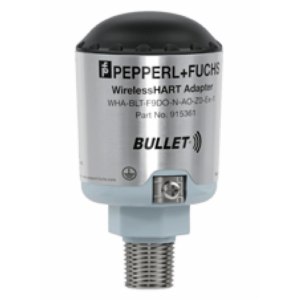 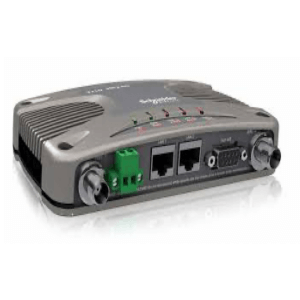 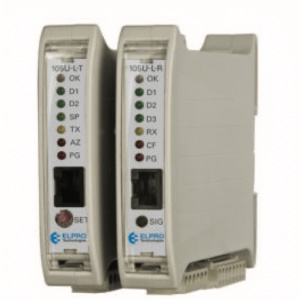 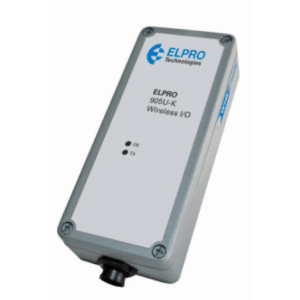 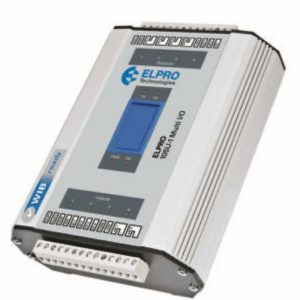 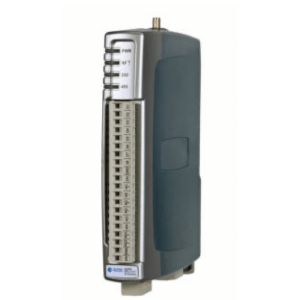 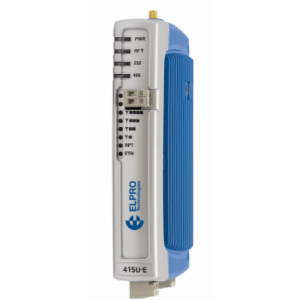 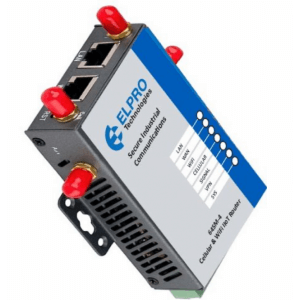 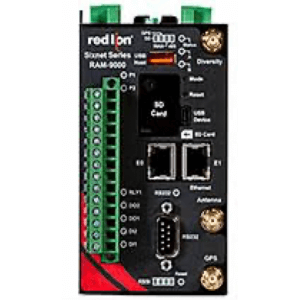 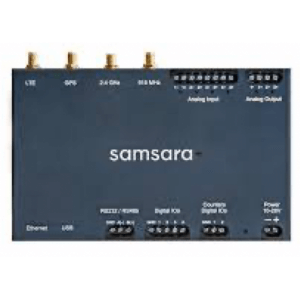 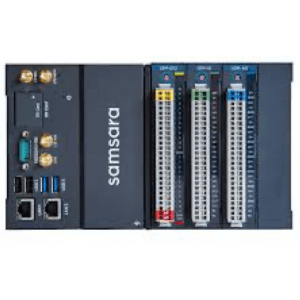