BrightPet Nutrition Group Manufactures Premium and super premium pet foods for U.S. and international markets. Its top-of-the-line ingredient options and state-of-the-art American manufacturing operations ensure the quality of every recipe they produce. A pioneer in the organic pet food space, BrightPet owns the first organic-certified plant in the U.S.

and is the only USDA organic certified pet food producer on the east coast. BrightPet manufactures dry dog and cat foods for a number of the most respected super-premium branded customers in the industry. The company is also a supplier of private label brands to its retail customers.

The original system consisted of a stainless steel tank on legs with a dual hose peristaltic pump with an inverter drive. The pump discharged through a 2” sanitary tube line and passed through a 1” coriolis style flow meter on its way to the mill/extruder.

At the time, the system pumped a homogenized slurry of fresh frozen meat, vegetables and water to the mill at rates of around 5 – 40 lbs/min depending upon the recipe and the production rate of the pet food. The speed of the pump was manually adjusted to achieve the desired rate, but the flow rate signal tended to be noisy and maintaining a steady consistent feed rate was problematic.

BrightPet hoped to improve the quality and the range of products that could be produced by modifying the equipment to become more efficient, less noisy, more accurate and repeatable.

The pump speed control was tied to a central control system that now allowed the operator to enter the desired flow rate from the recipe and the feed back from the flow meter allowed closed loop control of the pump speed. This system worked well at times, but very poorly at other times due to inability of the coriolis flow meter to provide an accurate flow rate reading on the slurry. Since the slurry is quite viscous (similar to soft ice-cream) and near the freezing point, the meter would not see the slurry as homogenous and the flow through its two internal tubes was not equal.

The end result was that the signal from the flow meter was erratic and resulted in poor operation of the system. A new, more consistent system needed to be implemented that would allow for a stronger, more consistent reading. 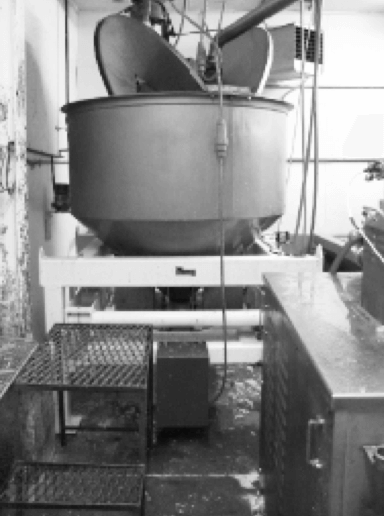 After looking into other types of flow meters and not finding any that looked like they would provide an accurate and reliable output, the decision was made to go with a Loss-In-Weight approach. After having good results with Loss-In-Weight powder feeder and five weigh belt feeders for the dry pet food ingredient batching system, the team decided to look at a cable scale Loss-In-Weight system for the meat slurry.

All of the articulate parts of the scale mechanism are supported from “axially inextensible, but laterally yieldable” suspension elements (stainless steel pre-stressed aircraft cable), which are arranged to hang freely, thereby avoiding any appreciable spring or hysteresis effect, variation in mechanical advantage, or binding due to imperfect leveling.

Because of this unique mechanical property of the force transmission system, any laterally directed forces and shock on the scale or its supported feeder cannot cause destructive shear and bending stresses to develop in the elements themselves or at the load cell junction. The system, being yieldable in the lateral direction, is therefore effectively and completely protected by using laterally placed “stops” in proximity of the weighed structure.

The team removed the legs from the meat slurry tank and mounted the tank on the scale. The pump was supported off the bottom of the tank and a piece of sanitary flex hose was installed from the pump discharge to the fixed 2” sanitary piping. The Loss-InWeight controls are connected to the plant control system via an Ethernet connection allowing the control system to set the desired feed rate and to monitor the operation of the system. The Loss-In-Weight controls provide a 4 – 20 ma signal to operate the pump at the required speed, and controls the automatic refilling of the meat slurry tank. 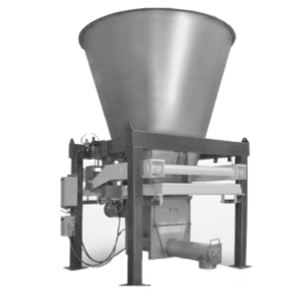 The system was commissioned in July of 2010 and today remains in successful operation. The combination of the progressive cavity pump and the cable scale and controls provides a very steady and accurate flow of the meat slurry to the mill.

This has greatly reduced the variation in the pet food as it is produced and allows for faster startups and less frequent adjustments by the mill operator. The system takes less than 60 seconds to get within a 1% accuracy of the desired feed rate after startup or changes in set point. The system has worked very well over the entire operating range of 5 to 65 lbs/min and is immune to changes in the flowability or makeup of the slurry.

Problem: Customer had ten ovens with 1980’s technology. None of the ovens were networked together and there were no drawings for most of the ovens. Over the decades, multiple minor wiring modifications had turned each enclosure into a bird’s nest of unintelligible wiring. When something went wrong, it took maintenance hours to troubleshoot.

Solution: NSI upgraded the entire control system and chose to use the Eurotherm Nanodac, adding power monitoring with the M-System 53U power meter, networking all the ovens together and displaying all SP’s, PV,s and alarms on a centralized 15” Weintek OIT, generating a powerful local notification system using the M-System IT60SRE Modbus TCP driven stacklight , providing a cloud based historian and remote alarming using a SCADACore Viacell edge device and tying everything together with Eurotherms’ ‘out-of-the-box’ oven SCADA system.  All of this had to be done for a budget that wouldn’t break the bank.

Three CT’s were added to each oven and connected to the M-System 53U power meter, which has a Modbus RTU interface.  This was connected to a Lantronix converter, thus providing a Modbus TCP interface, allowing massive amounts of power data to be extracted, stored and analyzed.

The Weintek display is used as a central operator station to show profile status, alarms and current oven temperatures for all ten of the ovens.

The M-System IT60SRE Modbus TCP stacklight was delivered with four lights. Each light can be off, solid or flashing and all driven by Modbus commands.  This gives the operator a wealth of available messages using combinations of lights and light states and all done with just power wiring and a Cat5 cable.  This again, reduces installation time and materials and subsequently cost.

The SCADACore Viacell communicates to all ten Nanodacs over Modbus TCP and sends status, temperature and alarm information to the cloud.  This is used as a back-up historian and to alert supervisors to any alarms.

The Eurotherm Oven SCADA system automatically recognizes the Nanodac controller and all relevant parameter addresses are pre-programmed.  With its pre-built graphical interfaces, this means that a complete SCADA system can de developed in a day and commissioned over a second day thus reducing the project costs drastically.

During the installation process, all the surplus wiring was removed, remaining wiring tidied up and traced.  ‘As-built’ AutoCAD drawings were then developed and delivered to the customer as part of the sign-off package.

A water treatment company in north-central PA had an 11 year old Foxboro PAC control system (Schneider Electric’s Eurotherm company made these controllers for Foxboro).  The municipality has two treatment facilities about three miles apart, connected via Fiber and using Profibus communication protocol.  Approximately 2010, Foxboro did a large upgrade and installed two T940 controllers (one at each facility) with three 2500 series I/O racks at one facility and two at the other – approximately 350 I/O points.  There was also a pair of radios bringing in a single tank level at one facility.

Unfortunately, two major problems occurred — the tank radio had taken a close proximity lightning hit and been destroyed, and Foxboro no longer supported the PAC series due to obsolescence.  The company had been quoted $350K to replace the entire system with new technology, and were challenged by the steep price.

Neal Systems was contracted because of our unique background with the PAC T940 and 2500 series controllers.  Our scope was to remove the T940’s and replace them with a newer Eurotherm T2750 control system, which would allow the customer to maintain ALL the field wiring with no TB changes or even changes to the I/O.  At the same time, the comms protocol was changed from a hard-to- support Profibus to an easy- to-support Modbus TCP protocol.  The failed radios were replaced with Elpro 905U-1 I/O radios and used a spare AI channel to add the tank level in (also replaced the antenna, cable and PT at the tank).  Three SCADA Wonderware nodes were also upgraded to the latest revision of software.

At the end of the project, the customer had a working, updated system that was easier to support, and estimated that they paid $150K for the total system, instead of the approximately $350k that they would have had to pay with a Rockwell Allen-Bradley solution, which would have required replacing all of the controllers, writing new code, and doing new panels.

Don’t get left behind and become susceptible to lost communications with legacy phone line alarm dialers.Below are the Top 3 Reasons to switch to a wireless, cloud-based monitoring and control solution for your waterand wastewater applications. 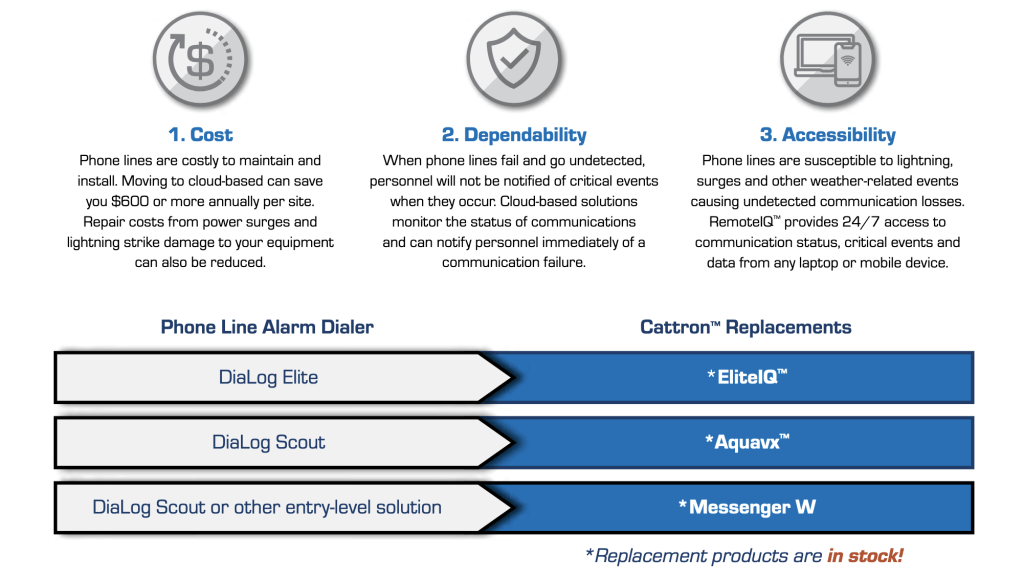